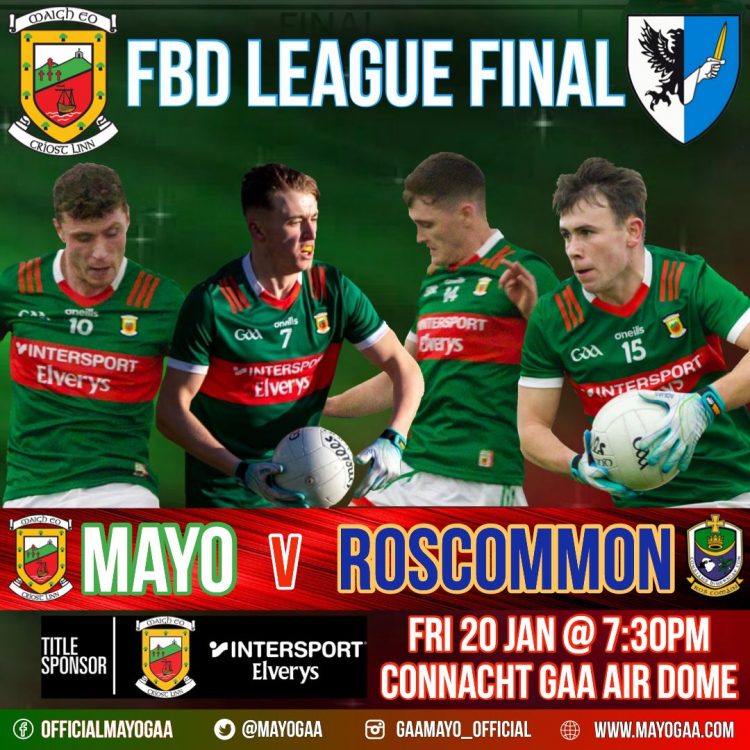 It’s almost beyond our collective memory – well, not quite, but it has been a while – since we last played in an FBD League final but this Friday evening at the Connacht GAA Centre of Excellence Air Dome we take on Roscommon in this year’s provincial pre-season decider. Throw-in at the Dome is 7.30pm on Friday. Tickets – a […]

With our opening league match now less than a week away there are a few things to get through, which I meant to do earlier on but then work intervened. First bit of news is that Clare’s Rory Hickey will ref Sunday’s match. Checking through the archive, it looks like it’s been a while since we’ve had him doing one […]

Now that our 2014 FBD campaign is done and dusted, it’s time for some stats on this year’s pre-season action. I’ve summarised in the table below (apologies in advance for its garish look – design isn’t really my thing and I am colour-blind) details of players involved and who scored what. As the table shows, we used a total of […]

Photo: Mayo Mick It’s that time of the week again and there are a few reports in this morning’s nationals on yesterday’s FBD defeat to Roscommon – our first loss to the neighbours, by the way, since this one back in 2009 – to bring to your attention. Here they are: Irish Independent, Irish Times, Irish Examiner.  Photos from yesterday in […]

Photo: Mayo Mick Roscommon ran out relatively convincing two-point winners in today’s final FBD League Group A match in the Michael Glavey GAA club grounds in Ballinlough this afternoon. A crowd of around 1,000 saw Roscommon’s superior fitness and cohesiveness prove the deciding factor as John Evans guided his side into the FBD final against Leitrim next Sunday. Mayo proved wasteful […]

You guys in the comments were much quicker off the mark tonight than I was but, for the record, here are the details of the starting line-up and subs named earlier tonight for Sunday’s FBD match against Roscommon at Ballinlough (throw-in 2pm): Mayo (Connacht FBD League v Roscommon, 19/1/2014): Robert Hennelly (Breaffy); Kevin Keane (Westport), Ger Cafferkey (Ballina Stephenites), Colm […]

FBD League campaigns come and FBD League campaigns go but one of the constants of January football for us is a meeting with Roscommon. No matter how the Connacht Council rejig their groupings we always end up in the same one as the Sheepstealers and yet again this is how it is this year. In addition, it’s often the case […]

Photo: afternoonwalks.wordpress.com It’s been a long old haul from late September to now, with too much time for all that wound-licking, but if ever evidence were needed that a new year of football action is once again with us it’s got to be with the welcome return of match reports on a Monday morning. They’re back and here they are. […]

Photo: Mayo Mick A wet and windy Bekan was the venue for Mayo’s second FBD game of the new season as they took on the students from IT Sligo. A last-minute penalty from Alan Freeman saw the host side share the spoils in what can certainly be described as a game of two halves. It finished in a 2-8 to […]

There’s been a last-minute change of venue for today’s FBD match against IT Sligo. @MayoGAA have stated that Fr. O’Hara Park in Charlestown is unplayable and so the game has been switched to the Centre of Excellence in Bekan. The throw-in time has also been put back to 2.30pm.